Dave Koenig is a prolific painter and tattooist currently living and working in Omaha, Nebraska.  His art has been exhibited at tattoo conven 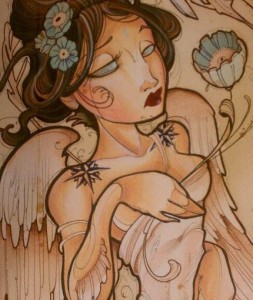 tions, festivals and art galleries throughout the world including Into the Woods Fine Art Gallery in Fort Lauderdale, Florida, as well as The New BLK, In Common and Bemis Underground in Omaha, Nebraska.

After attending five years of fine arts at The University of Nebraska Omaha where he also studied Anthropology and Native American Studies, Dave then proceeded to teach art at Pact Center School in Council Bluffs, Iowa for a year followed by another year of teaching art at The St. Augustine School , located on the Winnebago Reservation.  It was then that he began pursuing his career as a tattoo artist.

Dave has been tattooing, both locally and internationally, since 2001.  His home base is currently at Liquid Courage Custom Tattoos in Omaha where he continues to work with his mentor, Devin Ferguson.  Other professional studios Dave has worked at include Sailor’s Grave, Iron Brush Tattoo, Studio XIII, True Love, and Arctic Tattoo in Tromso, Norway.

Working with a wide range of mediums from Ink and water color to large scale acrylic, Dave maintains a controlled looseness of line work and a delicate treatment of color. Although heavily influenced by Japan’s historic culture and use of patterns, his work also reflects the imagery and antiquity of both Traditional Americana and Art Nouveau. 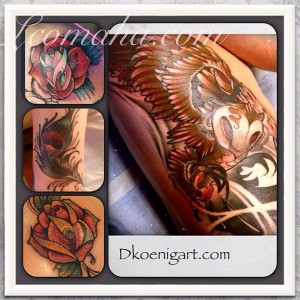 Dave has worked as curator for several art shows featuring fellow tattoo artists.  His imagery and art have appeared on skateboards and t-shirts for several companies as well as several album covers, concert posters and mixed martial arts event posters.  He is now expanding his work in to new territories of commercial art, painting custom guitars for Soapbox Guitars (of which he is co-owner) to illustrating a variety of liquor labels.

“As for the future, I intend to roll with whatever life delivers, push forward and take my art beyond limits.” – Dave Koenig 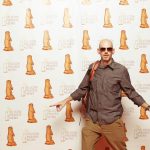